Presented by Mike and Diana Hopkins of MADMINERALZ.com

Time again for the second largest mineral show in the  continental United States, the Denver Gem and Mineral Show.  Diana and I usually drive to this show from our home in Kansas, but with the cost of fuel, rental car and the difference of turning an eight hour drive into a one hour and forty five minute flight..... it's a no brainer.  We will try and show as many pics as possible but it will be a short report since we are only going to be here a few days.  As usual we will include captions for the pictures as well as the price the dealer is asking for the mineral pictured.  Some of our customers have  pointed out that they probably could not afford to go to the show and buy nice specimens based on the pictures from our previous reports but, that is not necessarily the case.  There are literally tons of specimens at the show and the majority of the specimens can be purchased by those with a modest budget.  It seems that the majority of the show reports on the web tend to show spectacular pieces with equally spectacular prices. We will show some of these specimens as well as very nice pieces that the collector without a huge bankroll, like us, can afford.

We arrived at the Denver International airport at 8:00 am and after picking up the rental car we headed straight to the Holiday inn show to start the hunt.

The first room we hit was the room of Doug and Teri Wallace of Mineral Search.  Doug was dispersing a collection of Mexican minerals and Diana and I made some great and rare finds from this horde.

We will be adding more detail about the pieces pictured after the show. 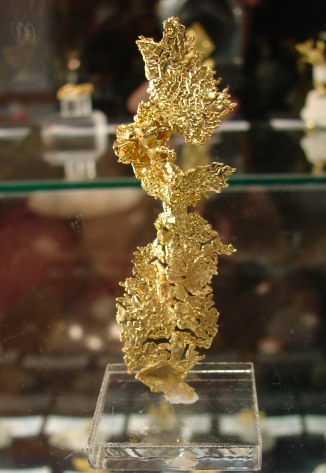 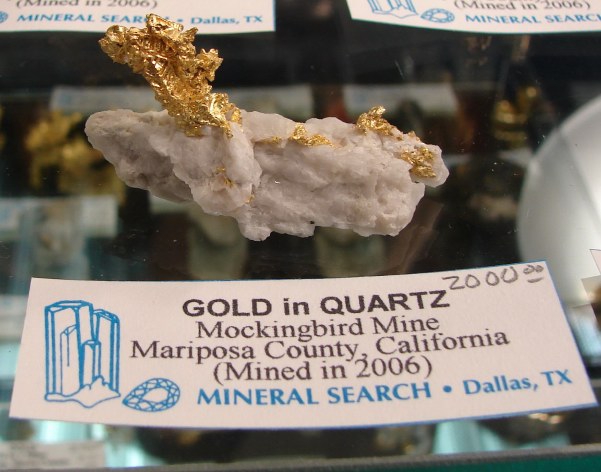 Seen above, are a couple of the outstanding Gold pieces Doug had for sale from the Mockingbird Mine. 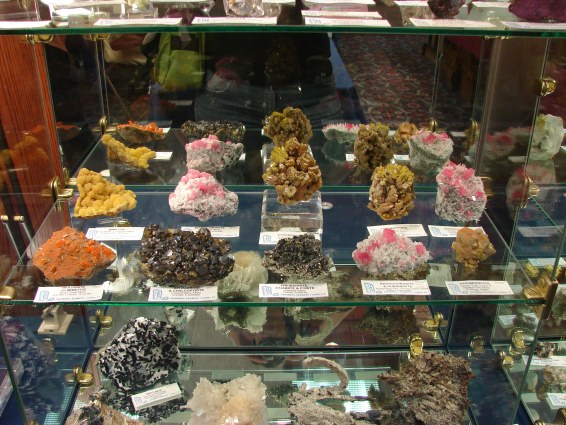 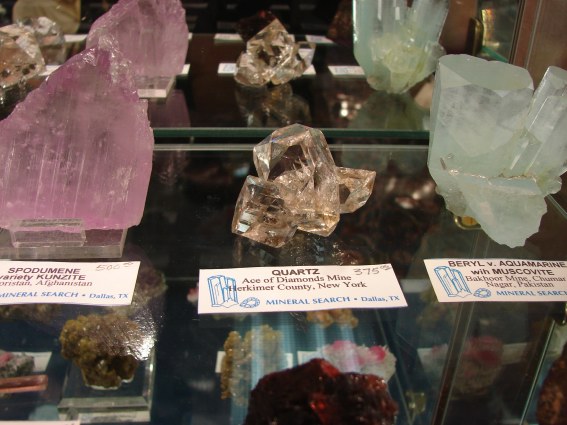 Here are a couple of views of  some of the display cabinets .

The lilac Kunzite wanted 500- a very good deal.  The Herkimer Quartz wanted 375- and was well worth it. 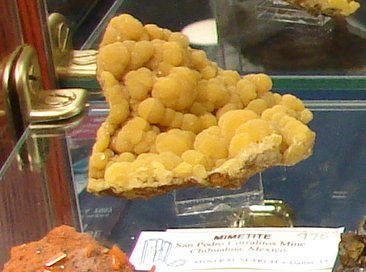 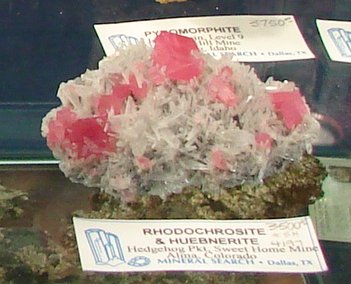 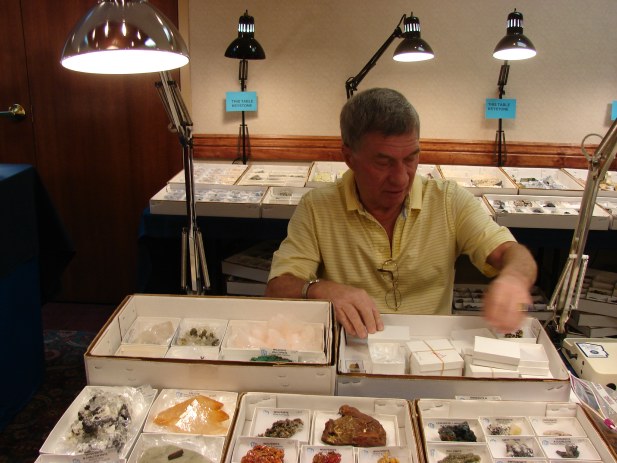 Doug adding up our purchases. 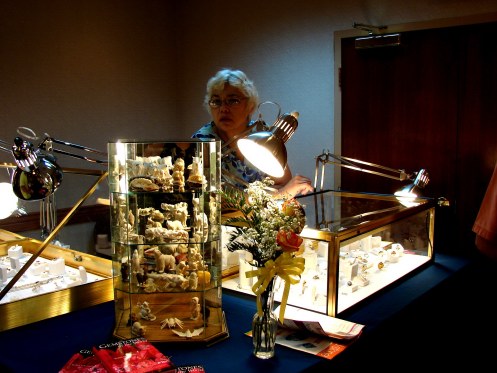 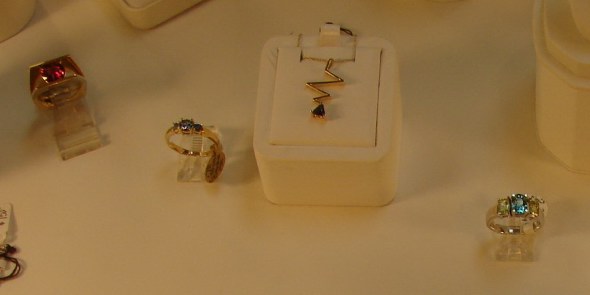 The next dealer we decided to visit was the always enthusiastic John Cornish, who was dispersing yet another top class collection that of Harold Urish. 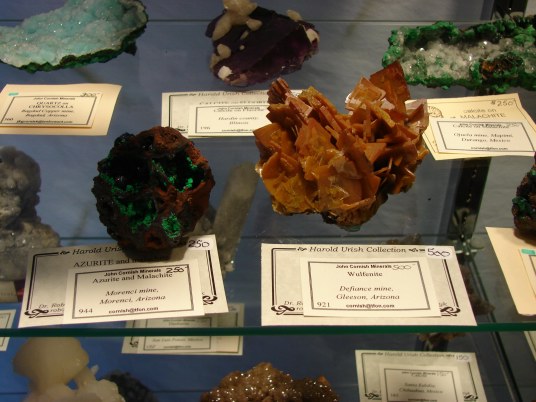 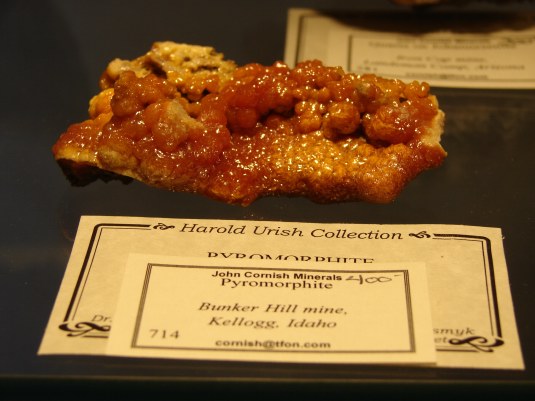 Although the picture doesn't show it the Malachite and Azurite left of the Wulfenite was spectacular with 'balls" of bright green Malachite highlighting sharp glassy Azurites. Doesn't  that Pyromorphite look wet!  Fantastic luster. 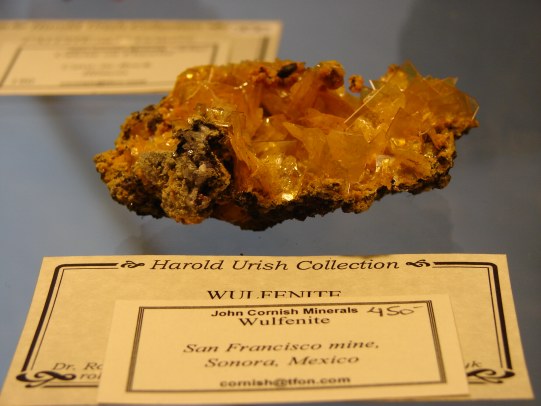 Wonderful windows of Wulfenite from the San Francisco Mine, Sonora, Mexico.  This one wanted $450 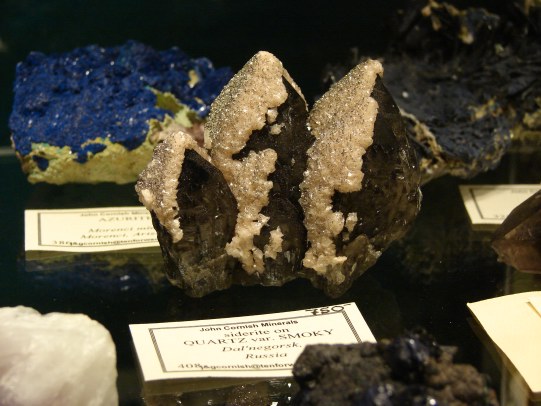 Now for something new!  Really neat sharp crystals of Apatite on a matrix of Albite or completely without matrix. 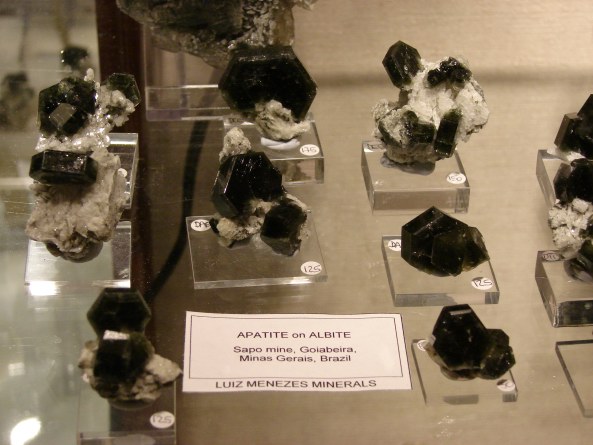 Some of these crystals show "phantoms" caused by color zoning. These were flying out of Luizs' room. 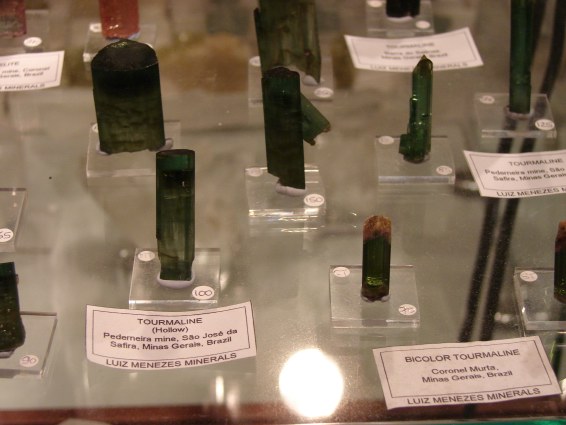 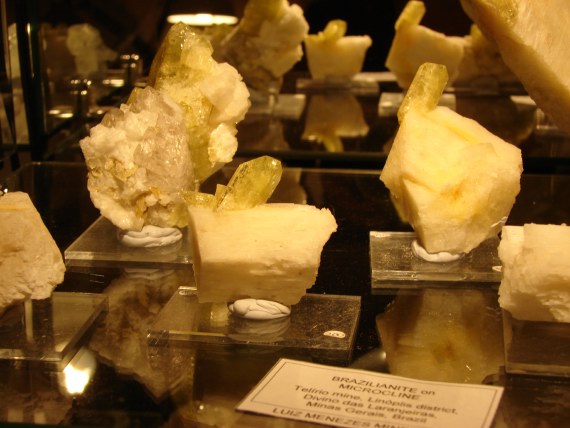 A fine and very affordable ensemble of multi colored Tourmaline and an incredible lemon yellow. Brazilianite on Microcline. 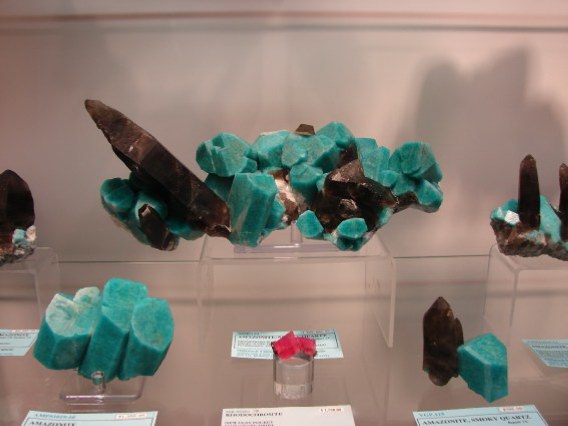 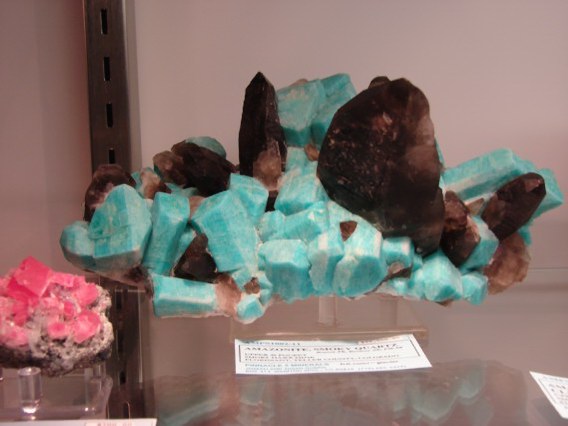 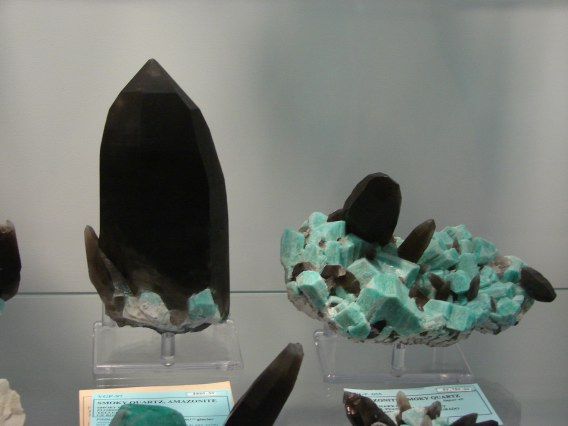 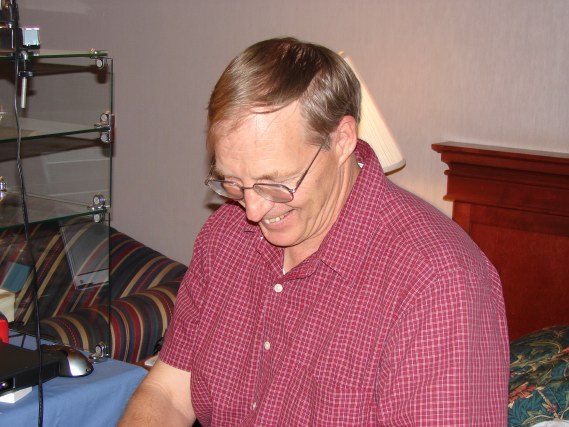 Joseph and Susan Dorris of Pinacle 5 Minerals had a room filled with absolutely stellar Amazonite and smokey Quartz. The reason he is smiling is that every specimen he sells gives him time in a track hoe to find more great pieces.

From Joseph and Susan's room we made our way to Wendy's Minerals.

Wendy had several flats of the new Pyromorphite from Dao Ping that has in my opinion the best color yet.

These bright green pieces were mixed with red Rhombs of Rhodochrosite making a striking display. 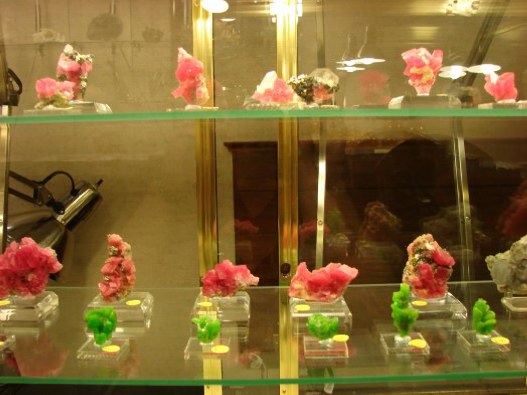 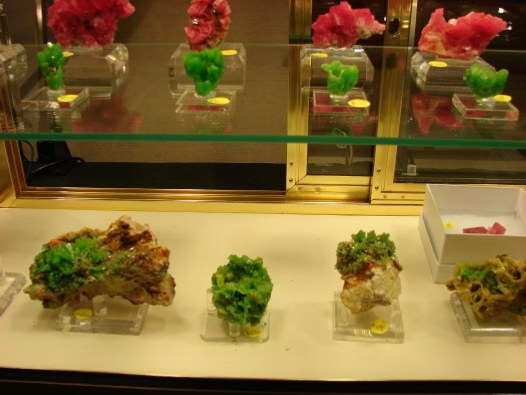 Wendy also had some amazing large Calcite cubes with a pyrite coating the edges of the cubes. 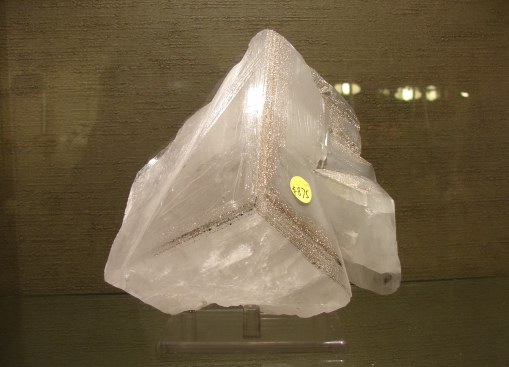 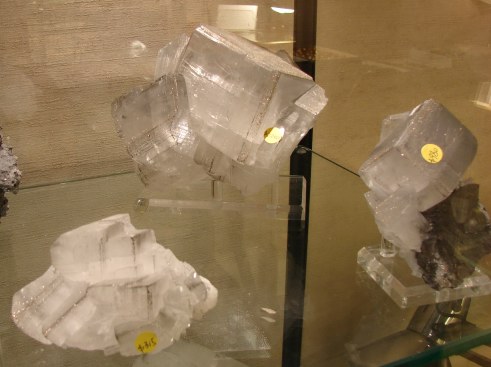 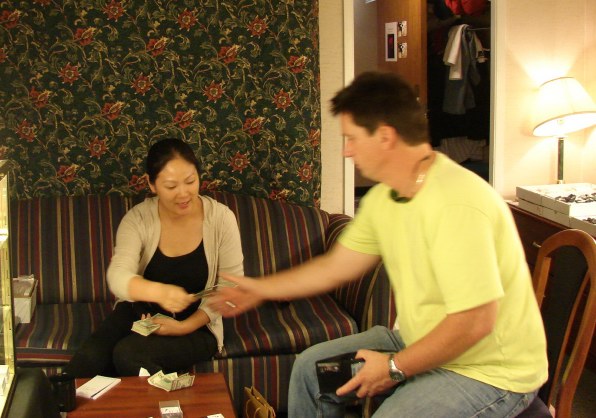 And now the piece de resistance a beautiful two foot tall Kunzite with attached Tourmaline that lit up the entry of Herb and Monica Obodda's room. 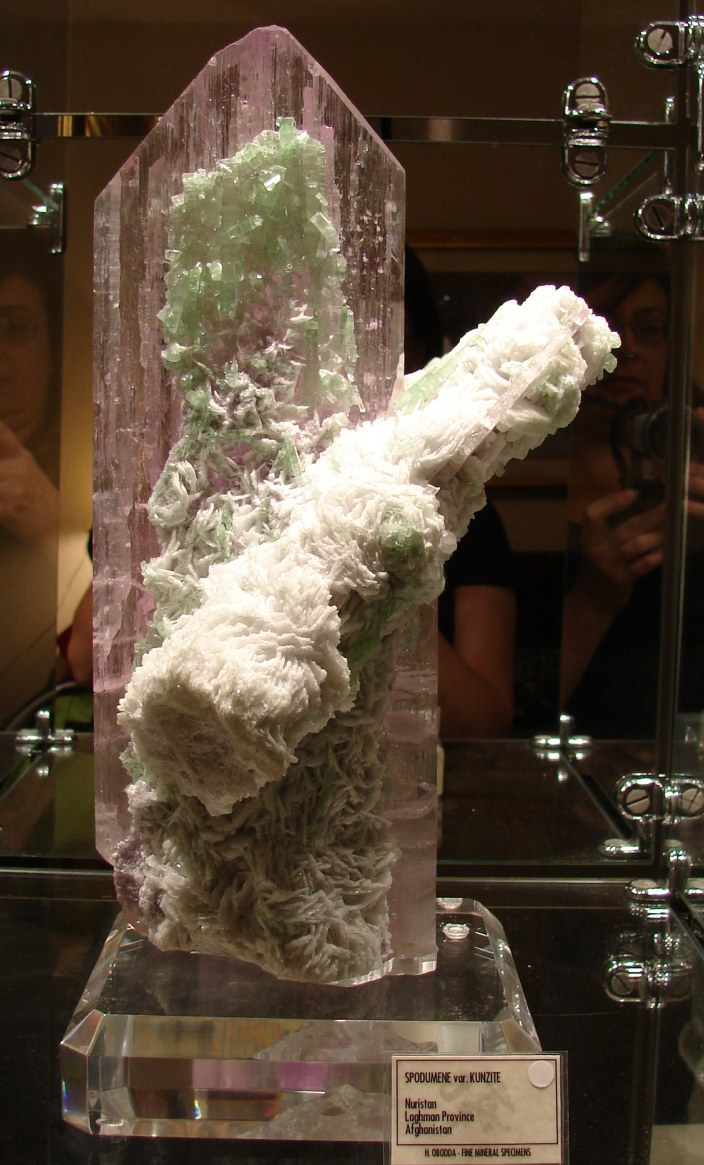 View down the c axis 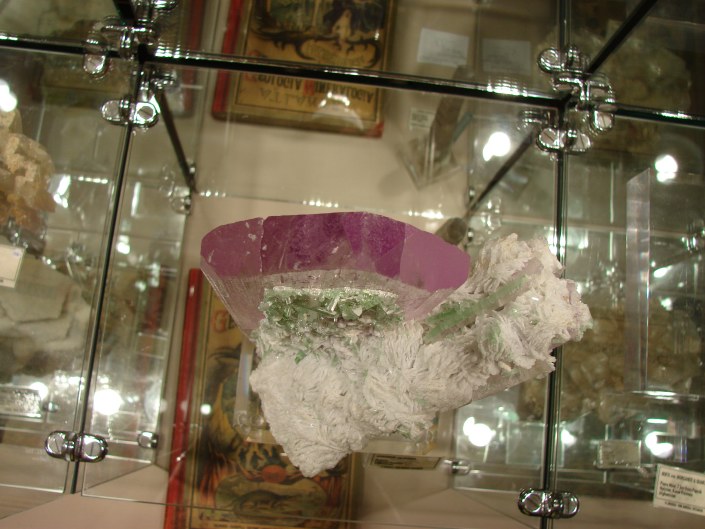